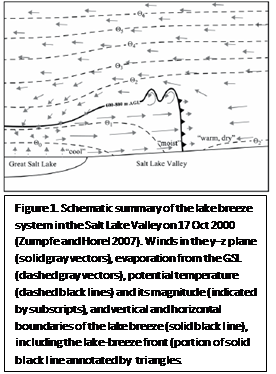 A Division of Air Quality (DAQ) study found high surface ozone concentrations near the Great Salt Lake during summer 2012. No studies have been completed to assess the areal extent of summer ozone over and near the Great Salt Lake, nor the vertical depth within which ozone is confined above the lake’s surface. This information is necessary to improve daily forecasts of ozone provided by DAQ staff as well as evaluate the performance of air quality models required for future Utah State Implementation Plans for ozone along the Wasatch Front.

The influence of warm season sea and lake breezes on the meteorology and air quality of mid-latitude coastal regions has been studied extensively both observationally and numerically. University of Utah researchers in the Department of Atmospheric Sciences have been studying during the past decade the impacts of the Great Salt Lake on atmospheric transport that affects air pollution along the Wasatch Front. PI Horel has led or co-led two National Science Foundation projects (Lake Breeze System of the Great Salt Lake 2008-2012; Persistent Cold Air Pool Study 2010-2014) that have incorporated a mix of numerical studies and field work (summer 2008 in the Tooele Valley; and winter 2010-11 in the Salt Lake Valley) that have examined lake and land breeze flows associated with the Great Salt Lake.

Figure 1 provides a snapshot view of the structure of the lake breeze as it penetrates into the areas surrounding the lake. While the basic thermodynamic and dynamic structures of lake and land breezes are understood, how those circulations affect ozone concentrations along the Wasatch Front is not: the air trapped beneath the stable layer over the lake at times during the summer contains low concentrations of ozone while at other times exhibits very high concentrations. Figure 2 attempts to summarize the physical processes affecting ozone concentrations near the Great Salt Lake, including transport of ozone precursors from the surrounding urban areas towards the lake, photochemical generation over the lake, and transport of precursors and ozone back towards the Wasatch Front by lake breezes.

The core objectives of this project are:
1. Determine the areal and vertical extent of ozone concentrations over and surrounding the Great Salt Lake during the summer.

Project lead Seth Arens, DAQ, will coordinate the planning for the 2015 summer ozone field campaign that will involve substantive participation from DAQ, University of Utah, and Utah State University researchers. The Operations Plan will detail two modes of operation: (1) automated data collection from equipment placed in the field for the entire summer and (2) intensive observing periods during which researchers will collect more extensive data. DAQ project lead Arens will lead the planning and coordinate the deployment of an extensive array of automated ozone sensors near the Great Salt Lake for the entire 2015 summer combined with some additional surface-based meteorological sensors. University of Utah and Utah State University researchers will participate more on data collection efforts defined to take place during intensive observing periods.

Ozone and meteorological data will be collected in late-August and early September 2014 over a several day period by university researchers to assist the planning for the summer 2015 field study. The instrumentation to be deployed during this prototyping for the 2015 field campaign will be a reduced set compared to that available for the 2015 Summer Ozone Field Campaign. Prior data collected during summer 2012 and 2013 will also be examined.

As part of the planning effort, ozone data have been collected at sites in addition to that at the Hawthorne DAQ site near 700E and 1700S. For example, Fig. 3 shows ozone measured on the University of Utah campus, which shows higher readings than that near major roadways such as the Hawthorne site on the valley floor.
An ozone sensor was installed in the cab of a TRAX car in mid-August on the red line as a means to test collecting ozone and other trace gas concentrations across the valley (see Fig. 4). The data have been particularly useful for seeing the higher readings of ozone on the western and eastern ends of the TRAX line. Ozone data are also being collected from an instrument mounted on a University of Utah vehicle (Fig. 4).

Figure 3. Ozone concentrations from an Ozone 2B sensor located at the mouth of Red Butte canyon on the University of Utah from July 22 through August 31, 2014. Periods when the ozone cocentrations exceed 75 ppb are considered unhealthy. 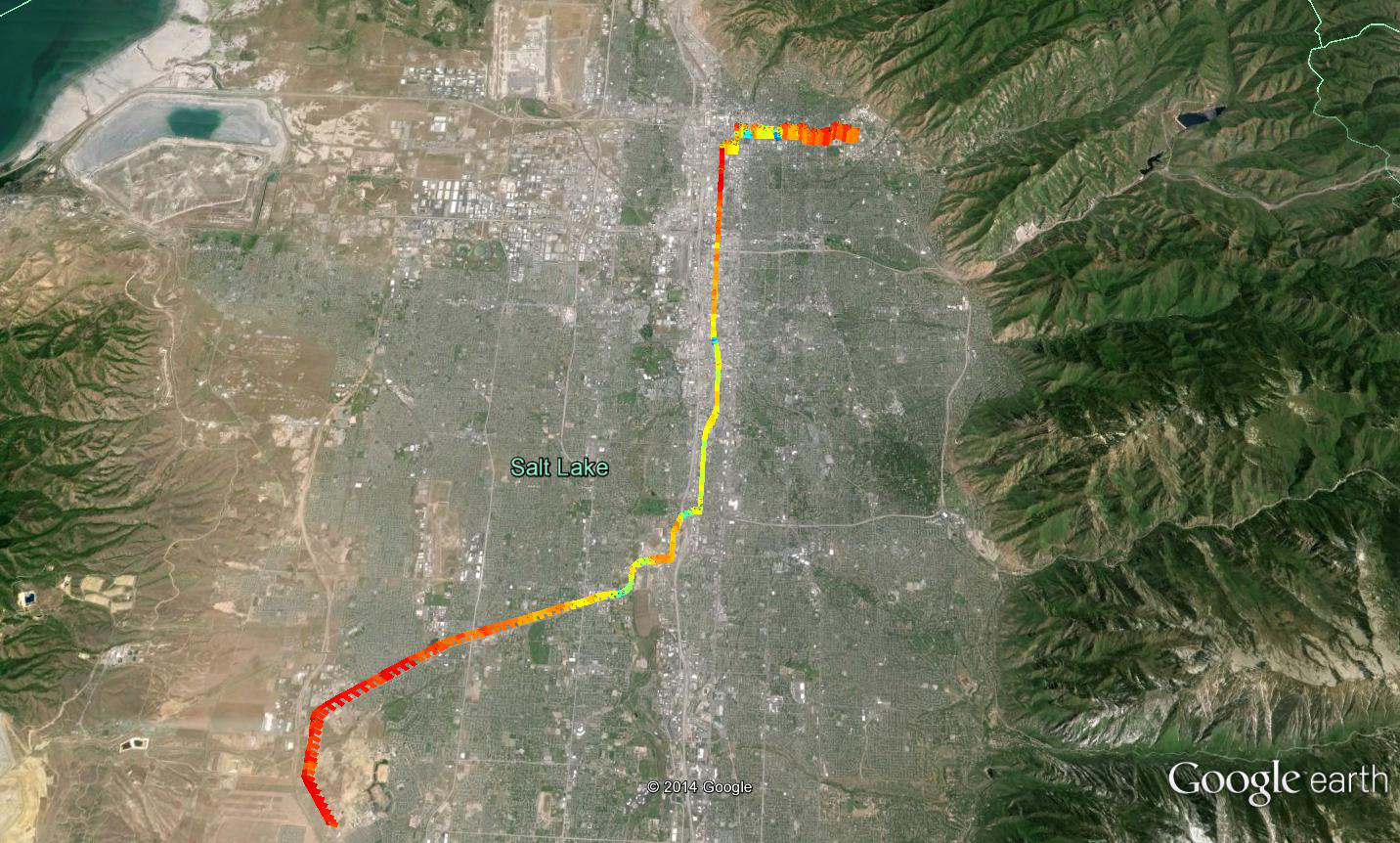 Figure 4. (Left) Ozone concentrations from an Ozone 2B sensor mounted on the Utah TRAX “red line” traversing the Salt Lake Valley from 12-13 MDT August 13, 2014. The highest concentrations are located on the western and eastern ends of the transects. (Right) Truck mounted weather and ozone sensors used as part of the 2014 testing.

Figure 8. 3-D plot showing the truck test drive to Antelope Island and then down South and West on I-80.

To view public coverage of the events please visit the UTA Blog and/or view the KSL Story from KSL 5 News.